Brew Pipeline, a so-called “direct-access platform” started by Steven Kwapil and Trip Kloser, is playing matchmaker for craft breweries and wholesalers through the Guest Brewer program. Kwapil and Kloser have tapped industry veteran Marty Ochs — who served as Ninkasi’s director of sales between 2009 and 2013 before launching his own craft beer consultancy — with curating the program’s portfolio of breweries and building its network of wholesalers.

Essentially, Brew Pipeline has embraced the “Rotation Nation” phenomenon by pulsing distribution of established craft brands into markets where they aren’t currently sold. The process then repeats monthly with new brands taking the previous ones’ place.

The Guest Brewer program will initially launch in Northern California, Manhattan, Las Vegas, Reno, Eastern Pennsylvania, Boston, Rhode Island, Maine, Georgia and Wisconsin. Brew Pipeline’s goal is to deliver brands to half of the country before the end of 2019, however.

Speaking to Brewbound, Ochs said Brew Pipeline’s research found that craft breweries have about a nine-week window of high-velocity sales when they enter a new market. So Guest Brewer provides those companies with an opportunity to test a market without fully committing to a costly long-term rollout.

“We’re not going to create a beachhead for new distribution,” said Ochs, Brew Pipeline’s president of sales. “We are really just an introduction for Surly Furious to those who don’t have it on the East Coast or the West Coast.”

Brew Pipeline serves as a master distributor, assigning the previously identified Guest Brewer wholesalers to an exclusive territory for at least a 1-year term. Each month, the participating wholesalers are offered a pair of beer brands from up to two breweries, and they have 30 days to pre-order products. Once selections are made, Brew Pipeline orders the beer, which is then brewed by its craft brewery partners.

“We sell 20 [barrels]. They make 20. We buy 20. We send it. That’s it,” Ochs said. “No distributor has a risk of sitting on inventory, and the retailer has hopefully bought the right amount of beer to sell out in 30 days.”

According to Ochs, Brew Pipeline handles many of the expenses brewers and wholesalers would typically take on. The company is working with importer, distributor and service provider MHW on logistics, such as shipping and state registration.

“As a whole, when a brewer looks at this, we’re buying their beer, we’re providing cooperage, compliance, shipping, and we do a lot of marketing,” Ochs said, adding that the company also offers video, PR and social media services to each brewer.

One thing Guest Brewer doesn’t do, however, is accept beer packaged beyond a 15-day window, Ochs said.

“Sometimes this will be fresher beer than in their own market, unless people are buying it straight from the brewery,” he said. 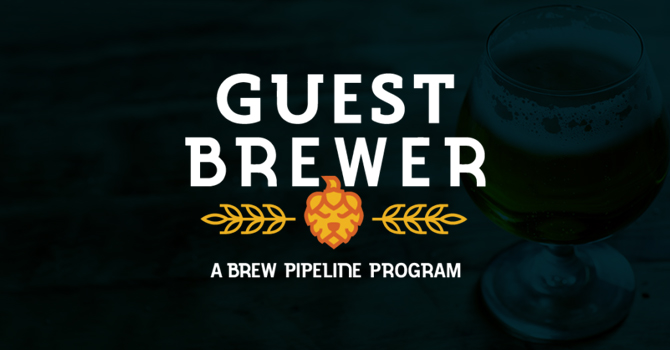 Once a brewery cycles through a market in as many as four months, Brew Pipeline releases it from its distribution agreement, without seeking compensation. In fact, Ochs said the company has already provided releases to every brand that it pre-sold through the spring.

“Each one of them has state complaint legal letters of release for October 1,” he said. “They’re free to go October 1, to anybody they want in those markets.”

Brew Pipeline exits the process from there, and the beer company can decide whether to sign with a wholesaler in the market, continue to offer spot distribution or exit altogether.

“They can prove the hypothesis to some degree, and then get married,” he said.

Nevertheless, available brewing capacity and distribution footprints determine how much beer is available and where the beer can be sold, Ochs said. For example, Surly provided Brew Pipeline with 200 barrels of its flagship IPAs, Furious and Axe Man, for the initial presell. In June, Furious will be available in Northern California, as well as Reno and Las Vegas, Nevada, while Axe Man will be sold in Manhattan.

Some shipments may be even smaller. Bend, Oregon-based Monkless Belgian Ales is offering two pallets of its tripels, Trinity and Capitulation, which Ochs said will be sold in Philadelphia before the end of June.

“We know the high velocity is there of these types of brands,” he said.

Due to the initial presells, Ochs is optimistic about the program’s ability to help sales of regional beer companies.

“I think it’ll increase craft’s share overall,” he said. “This will be able to generate just enough revenue for distributors to start filling some of that gap of declining regional sales.”